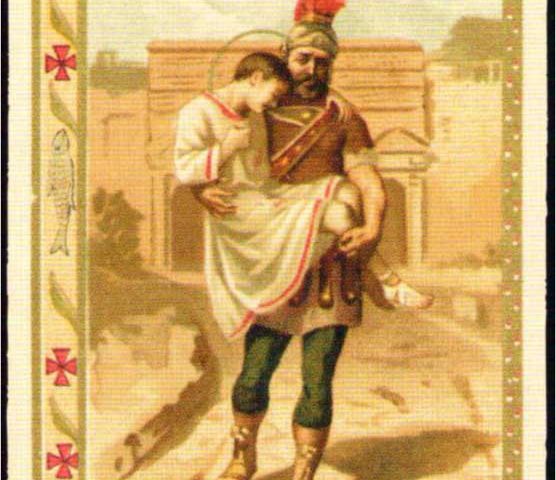 If our parish priest, Father Rocha, can do anything well–it’s deliver a memorable Sunday homily. Say what you may about the corpulent cleric–he may not be the most cuddly clergyman in the rectory, but when he talks, the congregation listens.

It being All Saint’s Day, Father Rocha waxed melancholy about his childhood talking about how the Sisters of the Immaculate Heart of Mary fostered in him a deep love and reverence for the saints. Yes, he acknowledged, the girls in his second grade class seemed to gravitate to saints such as Bernadette and the Little Flower while the boys seemed to opt for those martyred saints–the gorier the ending, the more interest engendered in the saint. I couldn’t tell you how Father’s homily concluded–the reference to martyrdom triggered a flashback to a small wooden desk on shiny black metal runners which seemed to be moored to the classroom floor. I reached beneath that desk and pulled out the dog-eared book called Story of the Saints.

Within its covers was the story of a third century boy named Tarcisius, a Roman martyr, which I jealously guarded in my book bag–his short life captivated me and, in my spare time, I would read and re-read the tale. As if that wasn’t enough to tug at my heart, the illustrator brought the altar server to life on those pages as few could.

Entrusted with the task of bringing the Eucharist to condemned Christians in prison, he was discovered by a mob (in the illustration they are older and angrier boys) and instead of relenting and surrendering the body of Christ, the Blessed Sacrament, the boy saint resisted and was beaten to death. At the end of the story, a bearded Roman centurion cradles Tarcisius in his arms and returns the martyr’s limp but beautiful body to his distraught parents who would later bury their son in the Catacombs.

At home, I would follow my parents around our tiny home badgering them to validate my feelings toward Tarcisius from the third century AD.

“Yes, it was a terrible thing,” they empathized. But I never saw them sneak away with my book and read it under their covers.

That story left an indelible impression on me, but had lain dormant for all these years until today’s homily. I wondered then as I wonder now how an innocent young boy could sacrifice his life to protect the Eucharistic host or what we Catholics believe represents the body of our Jesus Christ. Would I be able to do the same?

I hope it will never come to that, but I can still admire the child saint of the early Christian church, and hope to summon that courage should it ever be needed.

The poem of Pope Damasus (366-384) speaks to the martyr, especially in these last lines: