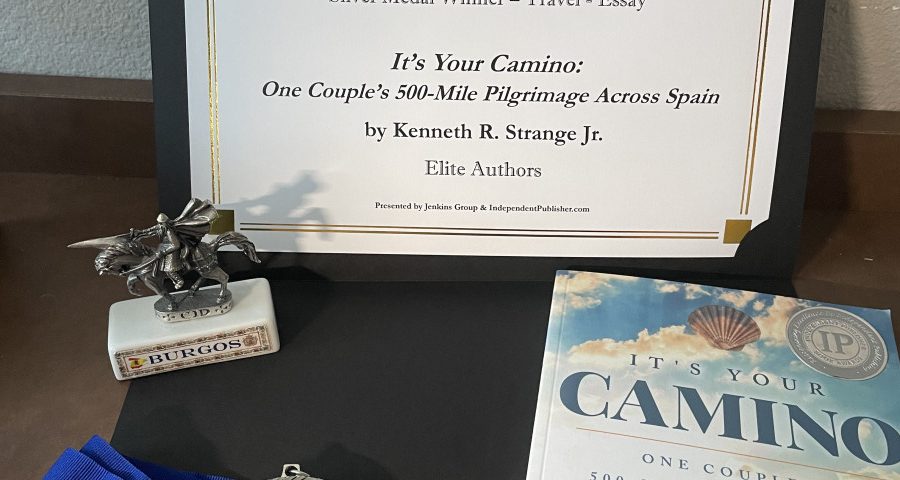 Last Tuesday I received an unlikely Instagram message from Christine Reed aka ‘ruggedoutdoorswoman’–at least that’s what her handle said–who claimed my book It’s Your Camino: One Couple’s 500-Mile Pilgrimage Across Spain had garnered a 2021 IPPY Award. The young outdoors woman from Colorado, an author (Alone in Wonderland) in her own right, offered her ‘Congratulations.’ My first instinct was to dismiss the message as a cruel joke until I remembered I had indeed submitted my book in the Independent Publisher’s Contest contest. Fact checking their website confirmed, to my great surprise, that I had received a Silver medal in the Travel-Essay category.

“How cool is that!” I exclaimed to my wife.

“Very,” was her abbreviated response.

I was quite interested in my fellow medalists–there was the Gold Medalist, Suzanne Roberts and her book Bad Tourist: Misadventures in Love and Travel. My Silver co-medalist, Ed Griffin-Nolan, had written a book Nobody Hitchhikes Anymore while the Bronze medal had gone to Robert M. Goldstein with his tome The Last Passenger Train: A Rail Journey Across Canada. Catchy titles all, I now had three more books to read. I felt none of them would disappoint.

For the remainder of the day I savored my first literary prize and accepted my wife’s offer of a celebratory dinner at In-N-Out Burger. However, the following day I was back at it–hawking my book to anyone and everyone who might listen to our story, our 2018 pilgrimage on the Camino to Santiago de Compostela in Spain.

My Life on Zoom

COVID-19 wreaked havoc on early marketing efforts and I watched in pain as my speaking engagements, book signings and church fairs came to a screeching halt. I scrambled to keep going but soon realized I could trade a world of in-person contact for the peer to peer virtual platform of ZOOM. Thus began a hefty schedule of sharing the Camino with Rotary Clubs, universities and any group who might take a chance on our story. Virtual visits with Rotarians from all over the country has been a blessing–from Maine to Montana from Florida to Oregon and every place in between, I am always moved by their uplifting spirit, intellectual curiosity and hospitality. There have also been global Camino podcasts with Dan Mullins from Australia and Jose Mari Ardanaz from Pamplona, Spain which have kept me on my public speaking toes while widening my audience. It’s been a great ride with some wonderful people who have graced our lives.

Return to the Camino

Along the sacred pilgrimage route in Spain we met pilgrims who warned us about the emotional pull of the Camino. One of them, a Sardinian named Mario, had begun his journey in Sardinia and was completing his eighth pilgrimage. From beneath the turret of the Templar castle in Ponferrada he confided in us, ” The Camino…It’s like a drug…an addiction.”

Initially, I scoffed at the idea but three years removed from the 500-mile Way of Saint James, Aurora and I have signed up for yet another Camino–the Portuguese Coastal beginning for us in Baiona in the next few weeks and concluding during a Jubilee Year on the saint’s feast day (our 40th wedding anniversary) in the great cathedral of Santiago de Compostela. We’re in good hands with Sean Rice and his remarkable team at FollowtheCamino a travel agency which specializes in Camino tours and is based in Dublin. Sean, this could be the beginning of a beautiful friendship!

There’s a lot going on–oh yes, I almost forgot to mention I still have a day job. We’re on a tight schedule gearing up for this second pilgrimage, still doing the occasional Zoom presentation, still marketing the book–several bookstores in Spain have invited us to drop in and discuss both the English and Spanish versions of the book. But I’ll deal with that tomorrow. For now I gotta get some sleep….in the morning I can start over and thank my social media consultant Con Sweeney, my literary muses–the author bloggers Anne R. Allen and Ruth Harris, my publisher Jenny Chandler of Elite Authors. Did I forget anyone?