The Joy of Learning a Foreign Language 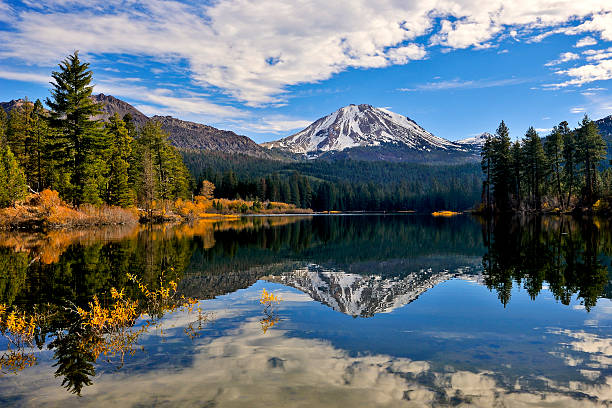 Fatigued by buffeting headwinds and a 2500 foot elevation gain, we finally gained a glimpse of Lassen Peak.  Or was it?  No, this was, in fact, a false peak replete with a meandering chaos of talus, boulders and geological detritus.

The true peak still lie a few hundred yards ahead, to the right of a receding glacier–a reminder we were at 10,470 feet above sea level where temperatures hover near freezing at night.  We pushed on with our walking sticks, first descending the false peak and falling in behind a couple who were skirting the remnants of a snow field and searching for the path to the actual summit.  But this trail seemed to end in the midst of icy scree; the man began to lose patience.  He shouted to his wife a few yards behind him that the trail had vanished.

By default Rory and I found ourselves the lead climbers and, while were able to scramble through a boulder field, we were soon stranded on the unstable rock ridge. Rory embraced a boulder not knowing whether to advance or retreat.  I managed to move off the ridge and climbed a few feet but this led to several choices, all of which seemed risky.  I could now see the craggy rock summit which seemed tantalizingly close…but the downside was all downhill…literally a thousand feet straight down!  As Rory hung on to the boulder for dear life, I shouted at her to retreat the way she had ascended.  Fortunately, we ended up back at the false peak.  Meanwhile, a group of climbers had discovered the real trail and about fifteen minutes later, panting for air, we all summited the plug dome volcano. It was hard to imagine this now quiescent volcano had erupted in 1915 devastating nearby areas and raining down volcanic ash as far away as two hundred miles.  It would become the most powerful eruption in the United States until Mount St. Helen’s sixty-five years later in 1980.

The handful of us climbers were treated to cobalt blue skies and a stunning 360-degree panoramic view. One hundred miles to the west the prominently snowcapped Mount Shasta rose from the Northern California landscape. Lake Almanor as well as nearby Helen Lake sparkled in the dazzling summer sunlight.  Somewhere beyond Lake Almanor, hidden within a verdant quilt of hills and white bark pine forests, was the bucolic town of Greenville where we had commenced our morning sojourn.

Thanks to our Greenville base camp coordinator, Charlie Day–we were able to enjoy the sandwiches he had prepared and packed earlier for us that morning.

While the climb had taken us 2 ½ hours, the descent was far shorter at 1 ½ hours.  However, despite the shock absorbing walking sticks, our knees took a pounding.  While descending Lassen, we had words of encouragement for those climbers heading up the well-trodden dirt path. However, the gusting winds seemed to pick up and turn colder.  We knew many of these climbers would have to turn around short of their goal.

Then we were descending the final hundred yards of a five mile round trip–the steepest part of the volcano, spilling out into the newly paved parking lot.  We sought shelter in a local gift shop running into the same Chicago couple we had met on the summit.  He was an attorney; she a professor of women’s studies.  We broke out a bottle of Zinfandel also provided by Charlie (with a wink and a smile) and were soon swapping stories about the Grand Tetons and Grand Canyon (theirs) and Costa Rica and Mount Washington (ours).

It seems futile to convey the natural beauty of Lassen Volcanic National Park since John Muir, preservationist and founder of the Sierra Club, had already described its boiling mud pots, steaming sulphureous fumaroles and acre upon acre of pine forests.   Muir wrote about his experiences saying, “ Miles of its flanks are reeking and bubbling with hot springs, many of them so boisterous and sulphureous they seem ever ready to become spouting geysers…”

Yet, our hearts belong to a tiny town of 1160 inhabitants nestled within the tranquil Indian Valley.  About five years ago, Rory’s sister, Caroll, and brother-in-law Charlie including their children Chester and Camille purchased a home in Greenville encouraging us to visit. Now five years and eight hours later we had arrived from Los Angeles.  But not before passing  through Sacramento, Maryville, Oroville and stopping for a box of fresh peaches at Sodaru’s Farm. Traveling the scenic byway north of Oroville, we wound our way through the Plumas National Forest and the magnificent Feather River Canyon where we were treated not only to granite gorges, railroad bridges and tunnels, but the sometimes roaring, sometimes whimpering Feather River, a river rich in 19th century gold mining lore.  Add the Legend of Ishi–the last of the indigenous Yahi Tribe and, for that matter, the last American Indian and Stone Age survivor and you have a special place in the history of this great land.

Our Greenville guides–Charlie, Camille and Chester–took great pride showing us around their town and valley.  Slowing down lest we run over wild turkeys competing for the road, we spied a handsome buck emerge from the woods, casually look us over and bound away.

After a welcoming barbecue Charlie and I graced the “Way Station” saloon, the only bar in town and a former Butterfield Coach station.  Nearby is the town of Taylorsville where there are more horses and ranches than people–160 residents at last count.  We discover another quaint ‘watering hole’ where a farmer and lumberman hold court on the front porch empathizing with their friend, an accountant, about the girl who got away.  Charlie explains Taylorsville becomes a cowboy and rodeo mecca on the 4th of July’s Silver Buckle Rodeo.

Later in the day, Charlie’s daughter, Camille, drives us to the Round Valley Reservoir, pointing out a bald eagle perched on a barren tree not far from a reservoir stocked with bass and bluegill.

As the day evolves, the surrounding mountains of the afternoon turn blue followed by sunset’s transformation to starlight.

Our final day was spent at Lake Almanor, one of the largest man-made lakes in the country.  With us was Mickey, our beloved black Labrador puppy. We were not so sure about this newest addition to our family–according to Chester and Camille, on the previous day, when we were climbing Lassen Peak, Mickey showed little interest in showing off his Labrador traits–swimming and retrieving.  Doubt had crept in about Mickey’s ‘skill-set’ but, on this day, as Charlie looked on approvingly, Mickey earned his Labrador “stripes” swimming and retrieving sticks–even a log which threatened to pull him under.

All in all, it was a wonderful time, just the six of us and a puppy relaxing on a beach ringed by pine trees and a panoramic mountain setting of Lassen Peak.

Such times as these go by too quickly and soon we were bidding our gracious hosts good-bye with hugs and promises to return one day.  We left the Day family on their private beach while a pair of Jet Skis and pleasure boats had begun plying the blue waters of this small piece of “heaven on earth.”

Epilogue:  Most of Greenville, CA was destroyed (in half an hour) during the devastating Dixie Fire of 2021.  Sadly, our Greenville ‘host with the most,’ Charles “Charlie” Day, also passed away in 2021.