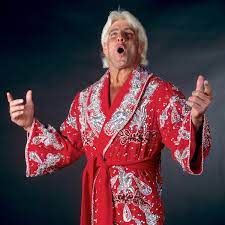 Ric Flair of the WWE

Inhaling the frigid arctic air by mouth had been a huge mistake.  My lungs and nostrils began burning and within minutes my ears were frost nipped. Welcome to Fairbanks, Alaska in February!  The temperature was lower than I ever imagined–minus 35 degrees.  Later that night the thermometer would bottom out at minus 45 degrees.

I cannot claim the afternoon flight from Seattle to Fairbanks was uneventful.  Quite the opposite.  Halfway to our destination, we encountered a healthy dose of turbulence causing the less than full flight to bounce around in Alaska’s winter darkness like a yo-yo.

But that didn’t faze the group of VIP wrestlers sitting behind me.  A party had broken out among them–drinks all around.  The leader of the pack, a flamboyant looking blonde man cloaked in fur coat and sporting a mischievous smile was trading hilarious barbs with a beautiful woman whose heart-shaped face and noteworthy physique needed no introduction. It was Beth Phoenix, WWE’s up and coming “Glamazon.”

I politely declined the offer of a drink (I was on duty) but provided my name in return.

The man regarded as the greatest professional wrestler of all time unhesitatingly invited me to join him.  I traded seats more out of curiosity than anything else.

“These are my friends,” he stated with an actor’s panache.

Like a circus master, the 59 year old legend added, “We’ve got a show tonight at the Carlson Center. You should check us out.”

The libations being generously dispensed made more sense now.

Going by the moniker “The Nature Boy,” Ric Flair commenced introducing me to his entourage including the square-jawed John Cena, an up and coming pro wrestler at the time.

After twenty minutes, the pilot was briefing the passengers on our approach to Fairbanks.  I wished the professional wrestlers success that evening and returned to my seat.

If everything went as planned I would soon be reunited at my hotel with the federal Task Force in preparation for Alaska’s high profile embezzlement case, the 2008 trial of pastor and former mayor of Fairbanks–Jim Hayes.