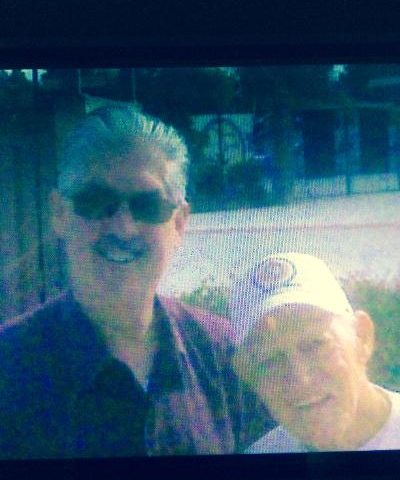 Me and Sparky (Anderson)

I’m not sure why I thought about Sparky.  Perhaps it had something to do with a grainy photo I discovered in a box of photos.

Before too much time passes, I wanted to memorialize our unexpected meeting that day–a ‘blessing’ now that I’ve had the chance to properly reflect.

One spring day in 2009, I found myself at Cal Lutheran University in Thousand Oaks, CA where Cassie and her Westmont College Women’s tennis team were playing Cal Lutheran in an NAIA (National Association of Intercollegiate Athletics) match.  Across the net from Cassie was on old friend from her high school tennis and USTA days–Holly from Saugus High School.

It was my first visit to this liberal arts college campus.  The sun was warm with a slight breeze blowing in from the ocean side.  During the match I meandered through part of the campus and came across a new baseball stadium named George “Sparky” Anderson Field.  I wondered what the connection was between the Hall of Fame baseball coach and the stadium.

Ambling back to my bench, the foliage from an oak tree providing shade, I settled in to watch the hard-fought match.

I was there but a short time and noticed an older man with white hair and baseball cap walking over to my bench.  He sat down and greeted me, “Hello.”

I turned to the man and answered in kind.  It was only then I realized I was sitting next to a man who had coached the Cincinnati Reds and Detroit Tiger baseball teams to three World Series championships.

The quiet man nodded, then asked what I was doing.

“Watching my daughter play tennis,” I said pointing to a young woman running down forehands on the court.

I couldn’t resist asking, “Sparky, are you here watching any of the teams?”

For the better part of ten minutes we made small talk.  His comments and replies, however, were not overly expansive.   There were some pregnant pauses and several periods of silence.

He asked me if I would walk with him to the nearby field which bore his name.  I hoped my daughter would not miss my presence.

It didn’t take long before we were staring out at the well-manicured baseball diamond.  In the distance, the Santa Barbara Mountains basked in bright sunshine.  Sparky was smiling again, he seemed calm and relaxed in this environment.

“They named the field after me,” he proudly stated before lapsing into silence and whispering the last word I would hear him speak, “Nice…”

I wasn’t sure if the comment was directed to me or to himself.

Suddenly, someone shouted out the name “George.”  We looked over our shoulders to see a young man, arms akimbo, greatly relieved to have found Sparky.

“There you are…geez… I’ve been looking all over for you.”

The preppie looking young man turned to me apologizing and asking if “George” had been any trouble.

“But I’d be grateful if you could take our picture together.”

The young man dutifully snapped a photo with my cell phone, a photo which remains a part of my collection.

He may have been a student caretaker or a relative, possibly Sparky’s grandson.  I didn’t have much chance to make further conversation with him.  It was clear Sparky’s time with me was up.  George Lee “Sparky” Anderson, the 75-year-old Hall of Fame coach, stuck out his hand and shook mine with the vigor of a much younger man.

And then he was gone.  After the Westmont/Cal Lutheran tennis match, I hugged my daughter, drove home and looked up Sparky Anderson’s life–his was an amazing story. Although he had played only one season of major league baseball, toiling in the minors for many years, a baseball owner realized Sparky related well to the players and asked him to manage.  A long-lived and successful managing career ensued.

Sparky Anderson’s “stats” are impressive.  He holds the record for most at bats for a player who only played one season.  A two-time Manager of the Year, he also holds the records of most wins by a Detroit Tigers manager and is sixth in overall wins of any manager who has coached the game.   Sparky was born in South Dakota but moved to Los Angeles when he was eight years old.  A batboy for the USC Trojans, he attended Dorsey High School in LA, a school where my sister-in-law’s husband (Mike Sheehan) teaches math.  But the more I read his amazing story, the more I sensed Sparky was an overall nice guy–a humble sort who deflected praise to his players.  He modestly remarked, ” I just get out of the way and let the boys do their job.”

A little more than a year after our unlikely meeting in Thousand Oaks, George “Sparky” Anderson was dead, his prolonged bout with dementia over.   There was no funeral for Sparky when he died.  No memorial service, either.  It was Sparky’s dying wish that his passing go without any formal observance.

Today, I found an article which spoke volumes about the man.

On being nice, he once said, ” It doesn’t cost a nickel to be nice to people.  It’s something you can give away for free and it means more than a million dollars.”